In the recent months we see an increasing amount of marine life suffering from fishing hooks and lines. Recently, diving a wonderful volcanic reef close to the shore we discovered a giant stingray. We expected it to take off as soon as we came closer, but it did not. It was hardly moving and was clearly exhausted. We discovered it was hooked on a line which was entangled in the reef.

Apparently (or that is what we concluded) it was caught on a fishing hook but the line snapped. Dragging the line along, it got entangled. The poor animal tried desperately getting loose and finally gave up by lack of energy and probably close to starvation. As we were unable to remove the hook, we cut the line as close to the hook as possible and let it swim off.

We hope it survives and regains its full energy despite the hook still being in. Of course we cleaned up the fishing line before continuing in our dive. 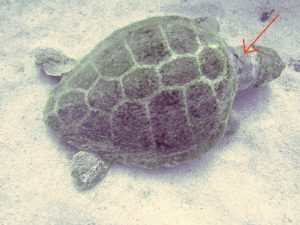 Late last week we had another close encounter. Diving on our Artificial Reef, a 24m dive, we discovered a beautiful sea turtle lying quietly on the seabed. Swimming over we noticed the turtle was not moving. Getting closer we spotted a thick fishing line with some very heavy weights on (about 1.5 kg). The line ran immediately towards the turtle.

Following the line we discovered a giant fishing hook going straight to the neck of the turtle. It could not have been death for a long time as the body decomposition did not yet start. Apparently it got caught by the hook and the line snapped taking all the weight down. Due to the weight the poor animal was unable to surface for air and suffocated. A tragic end for a very nice and protected sea creature…

We can tell about many more of these events but I guess you all get the point. We understand everybody wants to make a living but seen the cruelty we are confronted with on a regular basis we are wondering if there are not more environmental friendly ways to do game fishing. If nothing changes, more species will be endangered for disappearing and at the end everyone will loose.
So next time you are being hooked on, think twice and think about the collateral damage it might cause.