Discover the 4 most spotted Moray Eels in the Canary Islands

Seeing a Moray eel with its mysterious eyes and open mouth can be scary, but here in the Canaries they pose no threat to scuba divers.

There are currently around 202 known species of moray eels, spread over two sub-families.

In the Canary Islands the most common morays are from the Muraeniae sub-family.

How to recognize a moray eel?

Morays are opportunistic, carnivorous predators and feed primarily on smaller fish, crabs, and octopuses. Groupers, barracudas and sea snakes are among their few known predators, making many morays apex predators in their ecosystems.
The size, colour pattern and habitat of the Moray eel depends on the species.

Most of the Moray eels in the south of the Canary Islands you will find in places with a combination of a good hunting grounds and enough protection. You find them on the many volcanic rock formations, artificial reefs such as shipwrecks as well as on any debris they can use as a hideout.
None of the species found on the Canaries pose a threat to scuba divers.

The fangtooth moray (Lat. Enchelycore anatine), sometimes called tiger moray or bird-eye conger, is found in warmer parts of the eastern Atlantic Ocean, including the Mediterranean Sea, Canary Islands, Madeira and various other islands.
The fangtooth moray is distinctive for its bright yellow colouring and elongated jaw, which is filled with a large number of long “glasslike” teeth and dark eyes. 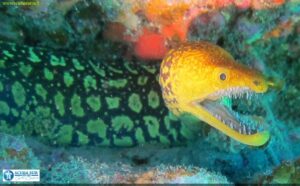 It can reach up to 120 cm in length. The fangtooth moray lives in rocky bottoms rich in crevices. The moray eels are nocturnal carnivores mainly feeding on benthic fish, cephalopods and crustaceans. 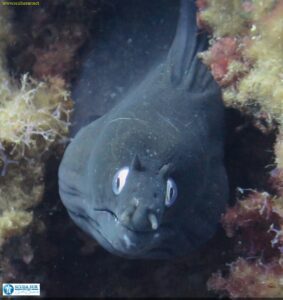 The Black Moray eel (Lat. Muraena Augusti) is a moray eel found north of the eastern Central Atlantic Ocean. It is non-migratory, and dwells at a depth range of 0 to 250 meters, most often at around 0 to 50 meters.
The Black Moray Eel has an elongated, snakelike body. It’s basic colour varies from dark blue to violet, almost black. In addition, its body is dotted with small, widely scattered white and black spots. You will recognize the Black Moray easily thanks to its bright white eyes.
The Black Moray Eel can grows up to 120cm long and weighs almost 2kg. 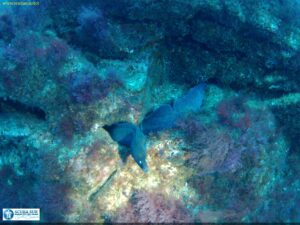 The Black Moray Eel is almost exclusively nocturnal, even if you sometimes see it outside its hiding place during the day. During the day they stay in holes, crevices and caves and only leave their shelter at nightfall to catch prey. They hunt for shrimps, cephalopods and small fish.
Being territorial, you often find the same animal in exactly the same place over a long period of time.
During the day you see the Black Moray Eel opening and closing its mouth. Not having a gill cover, they have to pump fresh water through their gills by opening and closing their mouth, so nothing to be afraid of. Be careful when their mouth is open all the time indicating they are in “hunting” mode.
In the Canary Islands, the Black moray reproduces between May and October, reaching its peak in August. 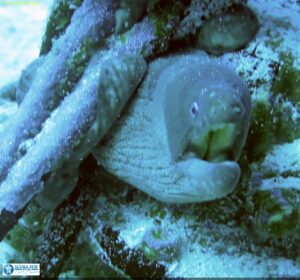 The brown moray eel (Lat. Gymnothorax unicolor) is a moray eel found in the eastern Atlantic Ocean and Mediterranean.
The Brown Moray Eel has a typically elongated eel-like body. As its name suggests, it is brown in colour with a darker tip. This is at least true for older animals. Younger animals usually have a somewhat bluish shimmer and a distinctive yellow dorsal fin. In addition, dorsal, tail and anal fins have grown together to form a fin hem.
Compared to other moray eels, only two of four nostrils are clearly visible. It also has a thicker head, with a less pointed mouth than other species in the Canary Islands. Its mouth cleft is large and reaches far behind the eyes. The skin of the brown moray eel is free of scales and covered with a thick slimy layer. 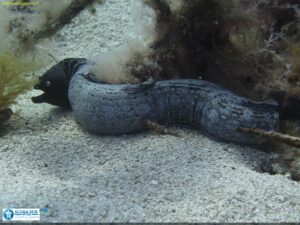 Brown moray eel reaches a maximum size of more than 100cm. It lives in rocky reefs. It spends most of its time in the protection of its hiding place.
When scuba diving on the Canary Islands, it belongs to the species of moray eels that can be observed more frequently. For the last 6 years, a brown moray eel is known to be living in one of the cylinder heads of a crashed aeroplane at 30 m.

The Canary moray (Lat. Gymnothorax bacalladoi) lmives only around the Canary Islands in the eastern central Atlantic, at depths between 17 and 605 m. Its length is up to 35 cm.
In the many years we have been exploring the deep blue ocean waters in the south of Gran Canaria we have spotted them only a couple of times, but did not succeed in catching them on camera.

We get many questions about what there is to see when you go diving in the south of Gran Canaria. We want to respond to this by creating a number of articles where each highlights a specific species we regularly encounter when diving in the Atlantic. The complete series gives you a good idea of what to find when scuba diving in the blue waters of the south of Gran Canaria. Let’s be clear we are not marine biologists;t just a dive center trying to provide valuable information to our customers.
For the full details of the species we would like to refer to www.Wikipedia.com. Here you’ll find more detail than we can go into.