Gran Canaria, the round island

Gran Canaria, located in the centre of the Canarian archipelago – also called the round island because of its circular shape – is 47 km across and covers an area of 1,560 sq km. Its highest peak, Pozo de Las Nieves (1,949m above sea level), is situated right in the centre of the island. 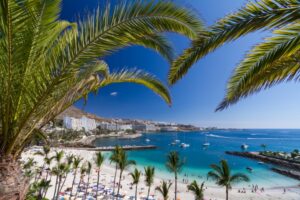 Gran Canaria belongs to an area of the Atlantic Ocean, known as Macaronesia. The nearest point on the African coast is approximately 210 km (131 miles) away, while Cádiz, the closest port on the European continent, lies about 1250 km (781 miles) north of Gran Canaria.

Gran Canaria, which is the third largest island of the Canaries, boasts 236 km of coast with sandy beaches, predominantly concentrated in the southeast. This is where you’ll find the famous beaches of Playa del Inglés and Maspalomas with its amazing sand dunes.

Cliffs dominate the south western and western coasts, whereas the coastline of the north and northeast offers more diverse pleasures, including a wide variety of beaches and coves. The mountainous center of the island features a few high peaks and many gorges radiating out towards the sea.

Due to the geological formation of the interior of the island, the landscapes of the interior are very different from those of the coast, originating many and varied ecosystems on the island. Being of volcanic origin, the island’s orography has a conical shape that is split in two by the ravines of Tirajana and Agaete, representing the main line of division that separates the enormous contrasts of the North and the South.

Gran Canaria lays in a north to a south ocean current. Also the dominant winds go from north to south. The north has a very rough coastline and is frequently subject to waves and wind. Thanks to the main wind direction, the north has a more moderate climate than the south and has nice green hill tops. Most of the economic activities are to be found in the north.

In the south, due to the absence of the dominant northern winds, waves and rain, is very dry. Here you only have a few hours of rain per year. Most of the touristic centers are concentrated to the nice and sunny beaches.

Between the beaches you will find nice cliffs that makes the coastline very attractive. Thanks to the protection of the high mountains in the centre of the island the temperatures in the south are substantially higher than in the north (up to 10° difference).

Diving in the south is great all year round. Thanks to its nice climate it is very rare diving is not possible due to weather conditions.
So next time you consider diving holiday, have a look at the South of Gran Canaria. It is definitely worth looking at.