The gracious hovering of this bottom dwelling ray is a great seeing. Their moves are harmonious and seem effortless, like performing in an underwater ballet. Sometimes they are solitary, but commonly you will see them with multiple species together. 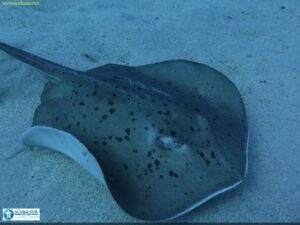 Typically we spot the Round fantail stingray in depths between 15 and 30m and Pasito Blanco Natural Reef and the Biotopos Artificial Reef are the dive sites in the south of Gran Canaria to spot them.

How to recognize a round fantail stingray?

The round fantail stingray has a nearly perfect circular pectoral body with a tail of about the same length. Most common they become somewhere around 1.5m, but species have been reported to measure up to 2.5m. The spine or sting varies between 50 mm for the males and 66 mm for the females. 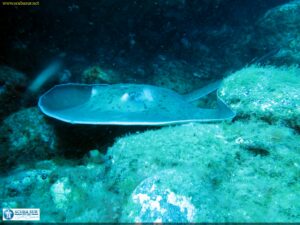 Sometimes you will find their old sting. Know that they constantly grow a new sting in front of the primary spine.
Their body is dark grey with darker spots on it. Their belly is white.

The round fantail stingray is mostly found in areas with a sandy bottom. They often seem to play around in the sand, most of the time multiple species together. When not moving around they are sleeping, either well buried in the sand or just lying in a protected area. 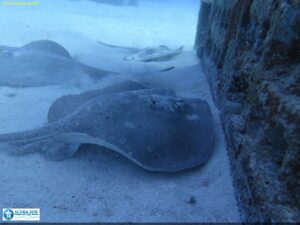 Being a stingray, you better keep your distance. Although not aggressive, they will defend when feeling threatened and use their sting as a reflex.

The round fantail stingray diet

This predator dwells the bottom to find crustaceans and fishes.

As part of the stingray family it will use its sting when being threatened.
The highest list if for fishermen accidently catching the stingray in their nets of on their hooks. Once at the surface the stingray will be under complete stress and will use all the means possible into its defense. Quite often we see species with their tail cut off. We expect that these species have been caught by fishermen who cut off their tail in order to be able to free the animal from the nets of hooks prior to releasing them.

Scientists believe that stingrays have the ability to sense the polarity of the Earth’s magnetic field, an ability called magnetoreception. Stingrays may use this capability not only for hunting prey, but also for detecting the strength and angle of the Earth’s magnetic field and the orientation of electric currents generated by objects in the water. The stingray could then use that information to navigate in the open ocean.