Spinning around a marbled electric ray

Thanks to its round shape, the marbled electric ray, also known as the Torpedo ray, is easy to recognise, although sometimes hard to spot. As a predator it is often hiding under the sand, just its eyes visible, waiting to ambush pray with an electric shock. Luckily the round shape in the sand is easily recognisable if you know what you are looking for. 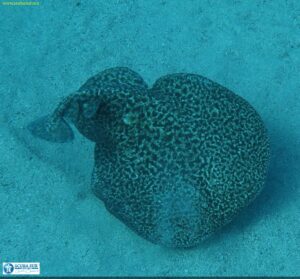 Take care when you see the Marbled Electric Ray starting to spin around. It is going into attack mode and is loading its electric charge. It now it touches you, you will be in for quite a kick.

How to recognize a marbled electric ray?

The marbled electric ray has a nearly circular body with a muscular tail that bears two dorsal fins. Its dark brown marbled pattern gives its name to the species. Females are often larges than males. A Female reaches up to 61cm, whereas a male grows up to 38cm.
They can be found on rocky reefs, seagrass beds, and sandy and muddy flats in shallow to moderately deep waters.

When diving in the south of Gran Canaria, always look out for the round imprints in the sandy bottom, indicating the presence of the marbled electric ray. If you are lucky it will sense your presence and slowly swim off. When it start spinning though, take your distance in order to avoid being attacked. In all these years doing local diving, we have no knowledge of divers being attacked, so we do not consider it as being a threat to scuba divers. 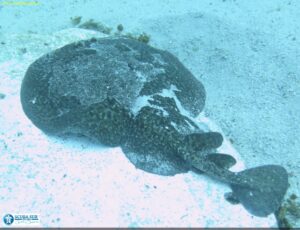 Mainly hunting at nightfall and living solitary, the marbled electric ray is often buried in the sandy bottom, except for its eyes. This slow-moving predator feeds almost exclusively on small bony fishes, which it ambushes from the bottom and subdues with strong electric bursts.

It defends itself by turning towards the threat, swimming in a loop, or curling up with its underside facing outward, while emitting electric shocks to drive off the prospective predator. Its paired electric organs produce average 70–80 volts of electricity, with the maximum potential of the electric discharge estimated to be as high as 200 volts.
Producing electric shocks tires the ray and the voltage will reduce each time a shock is produces. Also the temperature of the water has an impact on the produced electricity. Below 15°C, they are no longer capable of producing shocks.