Chat with us
es de fr nl
Skip to content

The common stingray, the boss of the sea

The solitary common stingray can be scary when sighted. Some of the older animals are enormous and can appear out of nowhere. Definitely during night dives seeing them appear out of the dark, you better move away as they won’t! 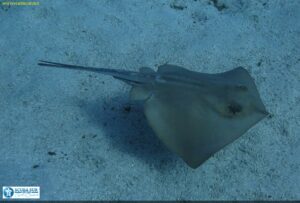 How to recognize a common stingray?

The common stingray has a body shaped more like a dice with pointy wings. It’s like its head is lying on top of its body. The plain grey coloration, the light belly and a mostly smooth skin are very recognizable. The tail is slender and whip-like, measuring approximately half as long as the disc.
A stinging spine with strong serrations, measuring up to 35 cm long and equipped with a venom gland at its base, is positioned about a third of the distance along the tail. A second or even third spine may also be present, as the spines are regularly replaced and new spines grow in before existing ones have been shed.
The common stingray is between 1.5 and 2.5m. At the highest point the height is 45 cm. Older individuals may also develop a row of bony knobs along the midline of the back.

The largest recorded common stingray specimen was found in 2016 in the Izmir province of Turkey in the course of a study on trolling. Its fins had a width of 2.21m, although its length could not be determined as the tail had been removed earlier.

The common stingray is typically found at depths accessible to recreational divers, but they can be spotted at depths down to 200m. It favours sandy or muddy bottoms in calm water but is also encountered near rocky reefs or in estuaries
Being a stingray, you better keep your distance. Although not aggressive, they will defend when feeling threatened and use their sting as a reflex. Remember, the sting of the common stingray is potentially dangerous.

This predator dwells the bottom to find crustaceans and fishes.

As part of the stingray family it will use its sting when being threatened.
The highest list if for fishermen accidently catching the stingray in their nets of on their hooks. when at the surface the stingray will be under complete stress and will use all the means possible into its defense.
Quite often we see species with their tail cut off. We expect that these species have been caught by fishermen who cut off their tail in order to be able to free the animal from the nets of hooks prior to releasing them.

Scientists believe that stingrays have the ability to sense the polarity of the Earth’s magnetic field, an ability called magnetoreception. Stingrays may use this capability not only for hunting prey, but also for detecting the strength and angle of the Earth’s magnetic field and the orientation of electric currents generated by objects in the water. The stingray could then use that information to navigate in the open ocean.