The common octopus is a master in disguise. When looking to ambush or to hide, it changes its color instantaneously and thus becomes one with the background. When really threatened he will eject a cloud of ink allowing it enough time to seek shelter. 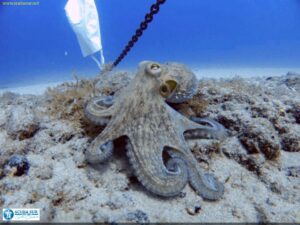 How to recognize a common octopus?

The common octopus grows to 25 cm in mantle length with arms up to 1 m long. It lives for a couple of years and may weigh up to 10 kgs.
The common octopus hunts at dusk. Crabs, crayfish, and bivalve molluscs (two-shelled, such as cockles) are preferred, although the octopus eats almost anything it can catch. It is able to change colour to blend in with its surroundings, and is able to jump upon any unwary prey that strays across its path. Using its beak, it is able to break into the shells of shelled molluscs.

During daytime, the octopus typically seeks shelter where a minimal amount of its body is presented to the external water. Note that the common octopus breaths trough its skin, so hiding poses a problem. When it does move, most of the time it is along the ocean or sea floor the underside of the octopus is obscured. This crawling increases metabolic demands greatly, requiring they increase their oxygen intake by roughly 2.4 times the amount required for a resting octopus.

During daylight diving you will need to look in cracks and hiding places to find the octopuses. You would be surprised how they succeed getting in the smallest holes when hiding. When you find a “nest” build with small stones, shells or any object you can find on the bottom, be aware that you are looking at a self-made hiding place of an octopus. Besides being masters on hiding through changes in their skin colour, they are great architects in building underwater shelters. 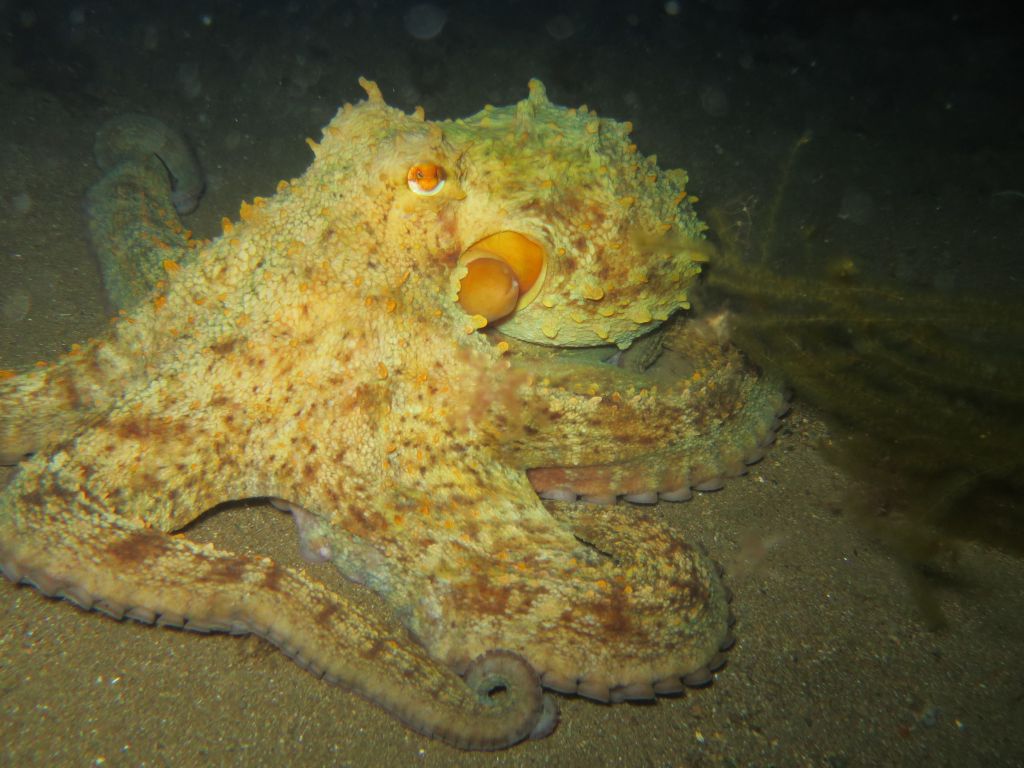 At night the story completely changes. During night dives you will find the octopus out in the open hunting or enjoying its catch.

When mating, the male octopus holds on to the female to inject its sperm. The male dies after mating. The female yields het eggs in long white strings which she hides in a shelter. Until the eggs hatch, the female protects her eggs and hardly taking any food. Once the larvae hatch after 3 to 6 weeks, the female dies.

The common octopus breaths through its skin and has three hearts. Its temperature is typically identical to that of the water.
Training experiments have shown the common octopus can distinguish the brightness, size, shape, and horizontal or vertical orientation of objects. They are intelligent enough to learn how to unscrew a jar and are known to raid lobster traps.