The angelshark is an expert to hide in the sand during the day. Only an experienced eye will spot it. On night dives, when hunting, you take a humble distance to this gracious creature. 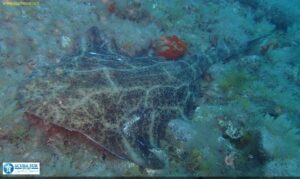 How to recognize an angelshark?

The angelshark, also known as squatina squatina and monkfish, lives in the coastal waters of the northeastern Atlantic Ocean. Well-adapted for camouflaging itself on the sea floor. The angelshark has a flattened body and large, wing-like pectoral fins whose anterior lobes are not fused to the head. The head and body are very broad and stocky, with small eyes positioned dorsally and followed by a pair of larger spiracles. The teeth are small, sharp, and of similar shape in both jaws.

This species can be identified by its broad and stout body and grayish or brownish dorsal coloration with a pattern of numerous small light and dark markings. It measures up to 2.4m long.

During daytime, the angelshark usually lies motionless on the sea floor, buried under a layer of sediment with only its eyes showing. At night, it becomes more active, and may sometimes be seen swimming above the bottom.

During the daytime you wil find the angelshark normally burried in the sand. If left alone, it poses little danger to humans. Often we see divers trying to removing the sandy cover in order to take the right picture. Be aware, when provoked, it is quick to bite.
When not hidden, the angelshark usually swims away when approached.

The shark is a nocturnal ambush predator that buries itself in sediment and waits for passing prey. It hunts bony fishes, but also skates and invertebrates.

The reproductive cycle has been estimated at 2 years with ovulation taking place in spring. The litter size ranges from seven to 25. Parturition occurs from December to February, that’s when they are commonly spotted in the Canary Islands. The newborns measure somewhere around 24–30cm. The offspring need an environment where they are protected from predators, the mothers come close to shore to give birth.

As a result of these steep population declines and the ongoing threat from demersal fisheries, the IUCN has assessed the angelshark as Critically Endangered.
Many organisations currently work in the preservation and the re-introduction of the angleshark. A very active organisation in the Angelshark Project.